'WHERE THERE HERE' - Winner of the REEL 13 shorts 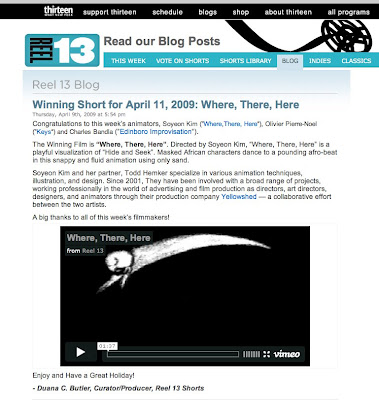 After a week's public votes, Soyeon's sand animation, 'WHERE, THERE, HERE' has won the broadcast slot for this week.  The Reel 13 Shorts program airs this Saturday, 9 pm EST, April 11th, 2009, on Thirteen/WNET, PBS New York.

Soyeon's sand animation 'Where There Here'


I made the original footage of this film, using sand within 2 days, a while ago...  It was shot using a video camera on a U-matic tape. I only meant to play with sand, not intending to complete this as an actual film.

Last year, I put the assembly of this movie clips on the website and, to my surprise, I received several requests to screen it in film festivals.  So I brought the footage into a computer, cleaned up the image.  There wasn't much I could do to improve the quality of the imagery, but I was able to fix some glitches.

I am just happy that this film has been shown to public in many places including Asia, Europe & America! The result is surly... way beyond my original expectation on this film!